Posted on May 30, 2020 by theamericanplutarch

Ephraim Deal Sorrels, an Arkansas and Oklahoma woodsman and farmer, was born Jan. 5, 1847 in Ashville, Buncombe Co., North Carolina, and died April 4, 1928, in Sparks, Lincoln Co., Oklahoma, aged 81. His father was Thomas M. Sorrels and mother Mary Drucella Lonon Sorrels, both born in 1827 in North Carolina. Ephraim’s father was a Confederate soldier during the Civil War who died in 1863 when Ephraim was sixteen years old.

The family had moved from North Carolina to Arkansas during the 1850s so that in 1860 they lived in Whiteville, in northern Arkansas, near the White River, and also near the town of Mountain Home.

Ephraim married Sarah Amelia Lane on March 22, 1867 when he was 20 years old. The bride was born in Black Swamps, Woodriff, Arkansas, on Aug. 4, 1852—she was 14 ½ years old when married (although the marriage certificate says 16.) She lived in Lawrence Arkansas, where they were married March 14, 1867. Her parents were James A. Lane and Malinda Coe, both born in 1830.

According to the 1870 census, Ephraim and Sarah lived in Independence, Arkansas, the township that included Whiteville, along with another man, perhaps a border or hand, named Charles Bostick, age 29.

According to the 1880 census, they lived in Mountain Home (which is the same as Big Flat; both were near Whiteville, so whether or not they had relocated is not clear). He was 33, she was 30 (which is slightly inaccurate; she was 5-6 years younger). Van, their oldest, was 5; Mary was age 2.  Ephraim farmed; Sarah kept house. All were born in Arkansas save Ephraim, born in North Carolina.

In the 1900 census, Ephraim and Sarah had relocated to western Arkansas, living at Lees Creek, Washington Ark. This census indicates that there was a 4 ½ year difference in age between husband and wife. They have had 8 children, 7 were still living. Those at home were Thomas H., born Sep. 1882, Cora E, daughter, born Oct 1887, son Jessie E. born Sept. 1899. Thomas, like his father, was listed as a farmer on the census. They rented a house.

Ten years later, in the 1910 census, Ephraim and Sarah had relocated to North Seminole Township, Oklahoma. In a recollection told by a descendant, Mabell Sorrels Tucker, she said:

“In 1902, Ephraim Deal worked as a rail splitter for the Ft. Smith and Western Railroad. He cut railroad ties from Ft. Smith, Ark. to Central Oklahoma. The railroad was to build a “round house” at Sparks, but due to local opposition to the project, the “round house” was built at Shawnee instead. Ephraim left the railroad at Sparks, Ok. He heard of a “dugout” on a school lease about 1/2 mile East of Sparks that was available. They lived in the “dugout” until Ephraim built a two room log house where they lived for a number of years.”  Sparks was in North Seminole Township, Lincoln County.

Ephraim and Sarah had relocated to Oklahoma before statehood, as their youngest son, Jesse Albert (born Sept. 27, 1899), died in Sparks on Jan 11, 1907, when he was 7. He was buried in the White Dove Cemetery in Sparks.

In the 1910 census, Ephraim listed both of his parents having been born in North Carolina. Sarah simply said, vaguely, “United States” as the birthplace of her parents.  Ephraim’s occupations were farming and and fencing. He listed himself as self-employed. Both were literate. They owned their farm. The census indicates that Sarah was the mother of 8 children, four now living. Ephraim and Sarah’s ages are listed as 63 and 56, which was more accurate.

By the time of the 1920 census she listed her parents’ birthplace as unknown; he listed his father as Georgia and mother as North Carolina. He was 73, she was 69. He told the census worker he was self-employed, “working on [his[ own account.” They continued to live in North Seminole Township. 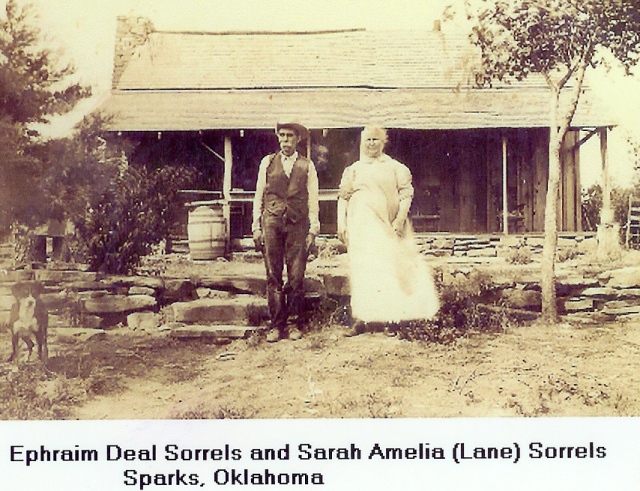