Posted on August 6, 2020 by theamericanplutarch

Franz Kafka’s Metamorphosis is a strange story about a man who awakes one day to find himself transformed, or metamorphosed, into a bug-like creature with many small skinny legs, antennae, and a hard shell. His appetites change and he can no longer communicate intelligibly to his family, who are astonished and horrified. He still thinks like he did when a human, still has the same emotions and intellectual desires. He is disgusting to himself and to others—as though humans might not be disgusting to other creatures. At the time Kafka wrote the book, during World War I, humans were increasingly disgusting, disgusted with themselves, with the rape of the environment and the destruction imposed on other, civilized and “less civilized” human peoples.

Another book of the same title, by the Roman poet Ovid, provides a completely different view of metamorphosis. His poem says that the divine might transform into material things and living creatures. Ovid represents ancient thought on the interaction of the divine with corporeal existence. He says that the Metamorphosis occurs in the beginning of time, when forms are changed into new bodies, such that the Artificer of all things forms humans from a divine seed.

Likewise, the ancient writer Apuleius wrote an account of Metamorphosis; the book was also known as the Golden Ass, and tells of a man transformed by magic into a four-legged ass. But this is not the story of the transformation of a human into an animal and back to a human. Rather, Apuleius tells of a man who goes through such suffering and fear, as a man and as an ass, that he is finally through prayer metamorphosized into a life of peace and contentment. This is by means of the intervention of the transcendent, symbolized by Isis, the Egyptian fertility goddess, into the man’s life. Isis represents the fundamental deity, of which there are many manifestations. Isis is the light and truth, very similar to Christ, the Logos, of ancient Greek and Christian philosophy. The worship of Isis was a chief mystery religion; such mystery religions were similar to Christianity; conversion was a metamorphosis of a person to realize and accept the transcendent.

Another ancient source that describes such a metamorphosis is the New Testament, specifically the synoptic gospels, in describing Jesus’s transfiguration (literally, metamorphosis) on a mountain in front of his choice disciples. Like Ovid, like Apuleius, the gospel writers claim that there is a connection between the transcendent and the transient in the person of Jesus of Nazareth, who experiences a connection with the one God during this time of metamorphosis.

The New Testament describes many such experiences of metamorphosis, such as that experienced by the Christian persecutor Saul on the road to Damascus, during which he experienced the transcendent, and became physically blind but spiritually aware. Paul, in the Letter to the Romans, chapter 12, described such an experience as being “transformed by the renewing of your minds.” This form of metamorphosis was akin to the world of Hellenistic philosophy in which Paul lived and wrote, in which thinkers and practitioners of the mystery religions searched for a mystical communion of the transient human with the transcendent deity.

A fourth-century intellectual and spiritual follower of Paul, Aurelius Augustine, described in the Confessions his own metamorphosis on reading a passage from Paul’s epistles during a moment of emotional crisis, in which he heard the divine voice of a child. This one moment metamorphosed Augustine spiritually and physically for a lifetime

There are many examples in human history of a metamorphosis that occurs when a human experiences the divine. Often these experiences occur during moments of trauma, during mental or physical anguish, when healing is needed, and a metamorphosis occurs in mind and body, and time is briefly interrupted by the coming of the divine into transient human affairs.

In today’s day and age of skepticism and incredulity, it is hard to find serious examples of such metamorphosis. But I would argue that they occur all of the time, and are not limited just to humans, but to all life forms. Such metamorphoses have to be sought after, thought about, reflected upon, before they are realized for what they are, moments when the supernatural intervenes, and the presence of God is felt, and fear is transfigured into love. 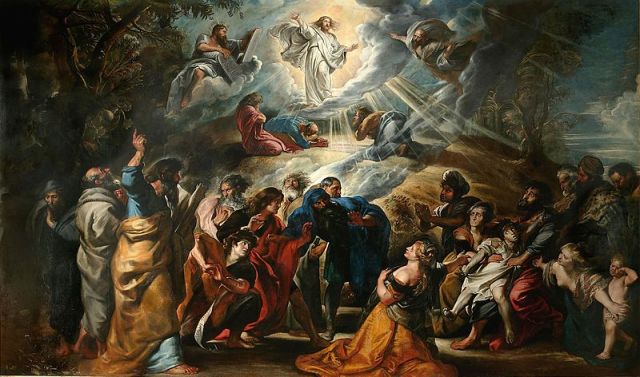