Posted on May 4, 2020 by theamericanplutarch

William Perkins, brother of Hattie Perkins Brown, who was the mother of Florence Brown Phillips and the grandmother of Milton Arnold Phillips, was the Perkins and Crawford family historian as well as a local historian of Pawtucket, Rhode Island. Uncle Will on several occasions penned extensive accounts of his family and his own life for the sake of local historical associations, especially the Rhode Island chapter of the Sons of the American Revolution.

William Lennox was born July 12, 1868 to George H. Perkins and Margaret R. Crawford. Margaret was George’s second wife, as his first, Mary Ann Tourgee, died in 1865. Margaret immigrated from Glasgow, Scotland, in 1853. George and Margaret lived in the Pleasant View section of Pawtucket; Will spent his whole life there. Although George was born in western Rhode Island, in the town of Exeter, where the Perkins had for centuries owned land, he apparently moved to Pawtucket because of Margaret (or, he was living there when he met Margaret). Will recalled that “my father was a Baptist Deacon until about the time I was born. At that time, he became interested in a newly formed Episcopal Mission near our home, and when it was really organized as the Church of the Good Shepherd, he became its first treasurer and senior warden.” He “was a clerk, vestryman, junior and senior warden for a period of more than fifty-seven years.”

Will graduated from Pawtucket High School in 1886 with a focus on English studies. He wrote that when he “was a young man I used to spend a vacation every summer in Exeter, Rhode Island, on the farms of my aunt, Mahala Perkins Reynolds; my grandfather, John Prosser Perkins; and my uncle John Riley Perkins. I used to sit down with a notebook and write down different statements which were given me by Aunt Mahala. Aunt Mahala was born September 13, 1827. What she did not know about the family history was not worth knowing.”

Will wrote further: “The various Perkins families owned a number of adjoining farms near Escoheag Hill, Exeter, Rhode Island. Exeter, on the west, adjoins Voluntown, Connecticut, which is only a short distance from where my ancestors’ farms were located. These farms were several miles from where my people lived when I spent my boyhood vacations, and so I had no early personal knowledge of them. A number of years ago my father showed me the different farms where his folks lived when he was a boy. Of course, these farms have been sold and resold, and to find, in most cases, where different people were buried is almost impossible. . . . The town of Exeter is about fifteen miles long and three miles wide. From where the Perkins families lived, it was a long distance to the Town Clerk’s Office, so not all of these births and deaths were recorded. Prior to the advent of the automobile, the town of Exeter was nothing but country roads and very high hills; the country roads have disappeared but the hills are still there; so that it was difficult for people living in this remote district to go to the Town Clerk’s Office and to other places like Providence, which was about forty miles away, in order to record various events.”

Will recalled that “there is quite a large cemetery on top of Escoheag Hill. It runs back to somewhere around 1700. With my father, I visited this cemetery on Memorial Day, 1897. I have good reason to remember the date. Most of the stones were common field stones with simply initials and dates, in most cases, scratched on.”

Will was extremely proud of the Perkins’s family history. The first Perkins in America, John Perkins, “came over in the Ship Lyon with Roger Williams in 1631 and settled in Ipswich.” Indeed, “from the time of Roger Williams down to the date of my birth,” Will wrote, his family “were all very good Baptists.

Will was a bookkeeper: from 1900 to 1920 he was Head Bookkeeper, Greene and Daniels Manufacturing Co., which when taken over by Fisk Rubber Co., Will became Purchasing Agent in the textile division until 1927, when he retired. He was active in all sorts of civic associations. He was a member of the RI Society of the Sons of the American Revolution, the Odd Fellows Association, and the Masons.

Will and Harriet L. Johnson were married on March 18, 1896; she died Feb. 8, 1897. On May 20, 1902, Will and Anna Elizabeth Ullrich were married. Their children included William Perkins, Jr., a schoolteacher who died in 1942, Henry C. Perkins, who was a Captain in the Coast Guard and eventually a Rear Admiral, and Miriam M., who died as an infant.

Will wrote proudly in 1945: “Earle A. Phillips, the husband of . . . Florence, is the Head of the Science Department in the Pawtucket West Senior High School, and Florence’s son, Milton Arnold Phillips, graduated with high honors from Brown University February 25, 1945, and is now an Ensign in the Navy.”

Will had a sense of humor. In a letter sent to his sister Hattie, he wrote:

Greetings! I have waited for 300 years to send you this message. Fearing I may not be here 300 years more am sending it to day.

Roger Williams wanted to be remembered to you all. He says Providence has changed some, since he saw it last.

From Brother Will and Lizzie” 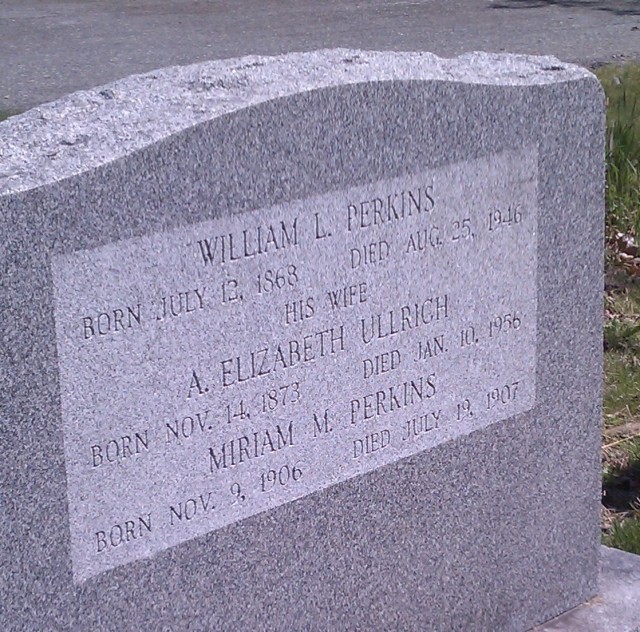